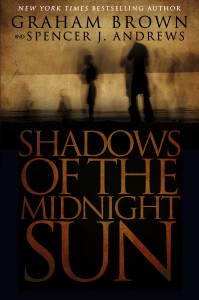 Shadows of the Midnight Sun (September, 2013)

…to enter the light, one must first confront their own darkness…

In the dark corners of the world, a battle rages for the souls of the damned. They’re known as The Fallen, souls afflicted with a curse that leaves them empty, violent, but immortal. The church calls them demons, vampires or the Nosferatu. For centuries a holy order known as The Righteous Fire has sought to destroy them, all the while hiding a secret that connects them, the church, to the beginning of the Nosferatu scourge. But as the events of an ancient prophecy begin to unfold, time may be running out for both groups, as the path ahead may bring forgiveness or destruction to one and all.

While investigating a string of disappearances connected to her husband’s murder, FBI agent Kate Pfeiffer is drawn into this world. She begins to uncover the truth and is faced with a reality she won’t believe. Soon she’s caught in a clash two thousand years in the making. On one side, the Righteous Fire, on the other, those who dominate the world of the Fallen. Her only hope to survive may rest with Christian Hanover, a jaded warrior and lost soul, who’s been searching for the truth about himself and his destiny for more than a thousand years. From an ancient Roman battlefield to the streets of New York. From Cologne Germany, to New Orleans and the swamps of Louisiana, time is running out as the fight against evil rages in the Shadows.

Order Shadows of the Midnight Sun: