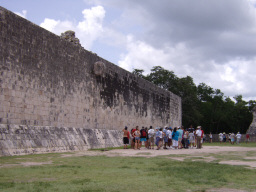 A month before Black Sun came out I decided to make a return trip to Mexico and visit the Ruins at Chichen Itza – one place I had never been before.  In a word the trip was incredible. First, because all the things I knew or thought I knew were even more amazing than expected.  And second because, even after researching the Mayan culture for a few years, there were surprises I didn’t expect. 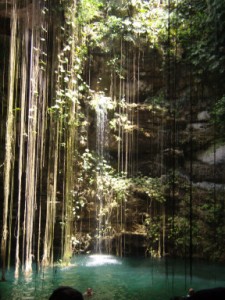 This was the first place we stopped.  A sacred well or sinkhole is called a cenote.  It’s filled with fresh water from underground rivers.  In my initial draft of Black Sun there was a scene where Danielle and Hawker are diving into a cenote to recover a missing artifact.  For certain plot reasons that scene was changed to a different location – you’ll have to read the book to find out where – but these formations continue to intrigue me.

The Cenote at Ik Kil was a sacred place, the Maya worshipped and sacrificed here to ensure the rains and thus the prosperity of the tribe.  So when we arrived and were told we could dive and swim in the cenote I was a little surprised.  It seemed something like doing a cannonball into the fountains at the Vatican.

I decided not to partake of the dive and swim, partly out of respect and partly out of not wanting to jump into 68 degree water.  But as I watched others diving, swimming and jumping into the sacred pool a different perspective came over me.  Every one of these swimmers had paid a substantial amount to be there, even just to enter the cenote.  Up above venders sell authentic, locally produced crafts.  Also connected to the complex were a pair of restaurants and tour guides and other persons whose living was tied intimately to the existence of this sacred place.  And for those of you who don’t know, the Mayan people of Central Mexico are some of the poorest in the western hemisphere.  But here, because of this sacred well, there are jobs and income that give a semblance of prosperity, so who is to say the Cenote at Ik Kil, the Sacred Well, is not doing exactly what it has always done for the people. 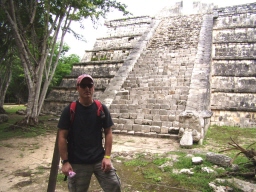 One amazing thing about Chichen Itza is its scale.  You can walk around for hours and continue to find older and older ruins.  In fact, the archeologists that are working there now insist that it is only 40-60% reclaimed.  The rest of the site – countless buildings and other ruins – remain hidden beneath a jungle that reluctantly yields its secrets.

Another amazing fact about Chichen Itza is that the place is engineered not only for light – to catch the sun during the equinox and solstice, but also for sound.

On the ball court where the sacred game of the Maya was played, the walls echo each sound seven times – a sacred number.  I can only imagine that during the game with the crowds cheering and certain psychedelic substances involved the scene must have been extremely surreal, almost like a movie with the soundtrack purposefully morphed and distorted.

Another strange thing to me – even though people were sacrificed here – a thought that gives me chills even though it was part of their religion – this place seemed and felt incredibly peaceful.  I can’t say why.

The Pyramid of the Sun 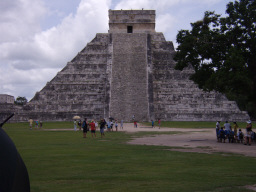 This is the central pyramid in the complex. As many people know, it is lined up with the sun so that on the solstice a snake like shadow slinks down one side till it reaches the bottom connecting with a carved snake head.

What most people don’t know is that this place is also engineered for sound.  The shape of the stones and the design of the temple at the top creates an odd echo.  It has about a two second delay before it comes back to you, and what I was told is that the faithful would come here. If you stand in one place and clap, the sound races up the stairs and back down again, now slightly distorted and sounding like the sacred Quetzel bird.

We tried it in a group setting and it was one of the most unnerving, interesting things I have ever experienced.  The Maya considered this the dragon talking to them.  On days like the solstice there may have been thousands or tens of thousands gathered before this temple chanting, clapping and listening as the sound cascades back down over them.  Probably a very moving experience.